Hello, I know it has been awhile since much of anything has happened on this site, but I thought I would give an update on what is going on. Honestly one of the main reasons there has not been allot of activity here is because there is too much activity on the walls. Since my last post, and more importantly since last I took photos of the walls, there have been innumerable changes to the walls. Most problems up on this site remain but some do not. But most all of the new problems being put are with holds that are not in any of my pictures. The photos of CATS were originally taken with my father's 15mp camera which allows for the detail needed. I do not currently have that on hand. So CATS Climbing as a guide is getting more difficult. I can still take video, and I have some video on the CATS Climbing video page that I have not linked to this site, but there is not really a great reason why that has not been updated in the past. In the present/last month or two, both sites have seen very little activity because I have been resting/nursing a tendon injury. It is now rested, and I discovered this last week, not healed at all. So I am not sure what my current climbing status is or will be in the near future.

So this is not a post promising more updates or a renewed energy in the site, but I thought I would let people know what is going on. CATS itself is as always literally better than ever with a plethora of new holds and problems. So I welcome everyone to come visit and if you need any help climbing there let me know.
No comments:

A somewhat thin, very pure, short, crimp line. People find it to be painful, but the edges are not sharp at all, they are just very thin so it is more of a maybe bruising sort of thing. There is a pretty obvious small pocket crimp directly over the lip on the left side of the main wall, and just up and right of that a better more rounded crimp of the same series, from these two holds you do a jump to the large green Frank Loyd Wright jug, the right hand starts on a sand colored straight thin crimp of the same series as the crimps above left hand starts down and left on a grey and pink old crimp that is a very similar style to the right hand, you get the good red spike jib as a foot. The video is here http://vimeo.com/9300504

And for the request in the comments: 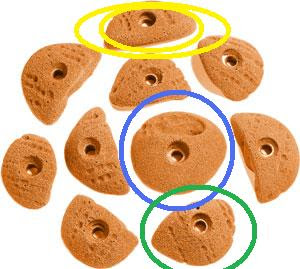 Start on two of the yellow circles(the razors I think) go to blue, come into green and jump to a jug? It will of course be hard to simulate without coming into CATS.
3 comments:

As I am being increasingly bothered by people telling me to update the website, I will provide the latest and most important news. Daniel has finnally returned from Europe(but is now in Hueco) and had the new best day in CATS history flashing 3 V12s and a V13, he also FLASHED the first ascent of a new Razor Ladder V14 in the steep, and sent a V15 in the steep after maybe 5 tries, and that is the short summary of the night. In more recent news Alex Puccio made a very impressive first Female Ascent of Keen! She helped set the problem nearly 2 years ago and has tried it a few sporadic times since but had not put much work into it. The problem, perhaps unlike Clear Blue Skies, really comes down to sticking the very long cross through 2nd move off of a heel hook. To say Alex is in good shape would be an understatement, I am starting to wonder if there is any move with a heel Alex cannot do.

In other news although we have not gotten many new holds since my last post(Chris! Get in here!) we have continued moving many holds and making many improvements. I am right in the middle of drastically improving the steep wall. Things are certainly getting better and not just because they are different, but the cost is that there are some problems listed on the site here which are a bit different now. Not many honestly, but if you have any questions feel free to ask, or come in on a Monday, Tuesday, Thursday or Friday.
2 comments: