The hardest thing in CATS. I made this problem in a desperate attempt to try to set something 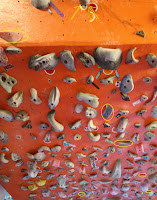 that Daniel would not be able to do in a day. I failed, for a third time. On his flash attempt he got through 9 of the 11 moves. It was the most impressive thing I have ever seen in climbing. He sent in about another hour. When I originally set the problem the 6th move through the 10th were all the crux and I could only do the first hard move. I still have not done the 7th move. I believe this is perhaps one of the hardest climbs in the country, potentially behind Terremer. If you do not think it can be this hard because Daniel did it in a day then you clearly just do not understand Daniel on straightforward moves on a 70 degree overhang.

The problem starts with a little 5 move